Since 2004, visitors to the National Gem and Mineral Collection at the Smithsonian's National Museum of Natural History in Washington, D.C., have marveled at the Carmen Lúcia Ruby, one of the world's largest and finest examples of July's official birthstone. 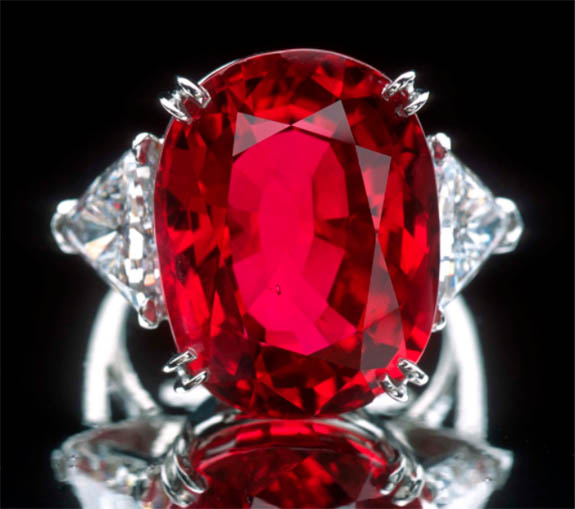 At 23.10 carats, the extraordinarily rare Burmese ruby exhibits a richly saturated red color known as "pigeon’s blood.” When the Carmen Lúcia Ruby joined the National Gem Collection 13 years ago, curator Jeffrey Post called the gem "the most important addition to the collection in the 20 years that I’ve been here."

The Carmen Lúcia Ruby is named for Carmen Lúcia Buck, the beloved wife of Dr. Peter Buck, who donated the ring to the Smithsonian after her passing in 2003. Carmen had been undergoing cancer treatments in 2002 and had heard rumors that the magnificent ruby might be coming on the market after being in private hands for decades. Carmen had hoped to purchase the ring to celebrate her recovery. Sadly, she would never wear it.

Knowing how much she admired the ring, Peter Buck, who is now 86, decided to provide the Smithsonian with the funds to purchase it and put it permanently on display. The Carmen Lúcia Ruby would be a gift to the American people and a testament to his everlasting love.

"So it seemed like a really appropriate thing to do, to give it to the nation so people could come and see it," he told The New York Times in 2004. "She would have really liked that people could see it and know it was the Carmen Lúcia Ruby, and that it wasn't locked away in a vault somewhere."

The oval stone was sourced in the fabled Mogok region of Burma in the 1930s and is acknowledged as being one of the largest faceted Burmese rubies in the world. While sapphire, emerald and diamond gems weighing hundreds of carats exist, high-quality Burmese rubies larger than 20 carats are rarely seen.

A nuclear physicist by trade, Peter Buck is famous for making one of the most brilliant investments in U.S. history. In 1965, at the age of 35, Buck loaned $1,000 to his family friend, Fred DeLuca, so he could open a sandwich shop. That shop was intended to help the 18-year-old DeLuca pay for college at the University of Bridgeport in Connecticut. DeLuca honored his benefactor by naming the shop "Pete's Super Submarines." That single store has since grown into the mammoth Subway chain, with 44,000 restaurants in 112 countries. Buck's net worth is currently estimated at $2.6 billion.

Peter Buck never disclosed how much he donated to the Smithsonian to purchase the ruby. We do know, however, that a similar stone — the 25.59-carat Sunrise Ruby — established a new world record for the highest price ever paid at auction for a ruby when it yielded $30.3 million at Sotheby’s Geneva in May of 2015.

The Carmen Lúcia Ruby can be seen near the Hope Diamond and Logan Sapphire at the Janet Annenberg Hooker Hall of Geology, Gems and Minerals, which is part of the Smithsonian's National Museum of Natural History.